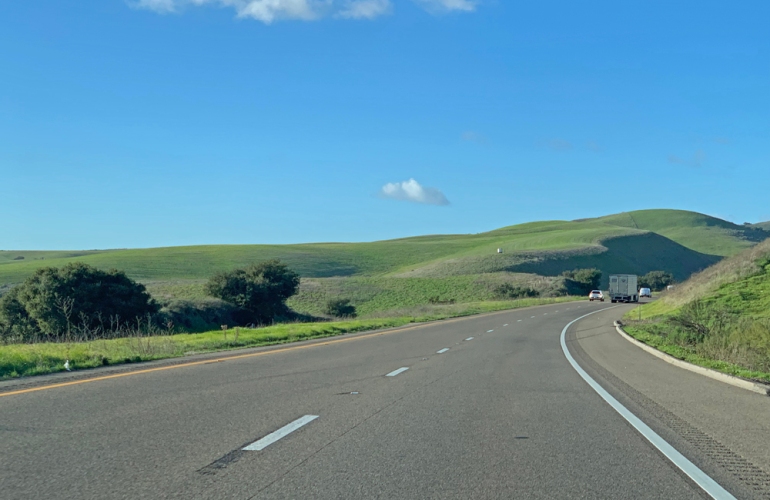 Dominique and I were driving from LA to the Bay Area. My step-father had passed away and my sisters and I needed to sort what remained of my Mother’s items and affairs. My mother’s home was in Lucas Valley (Marin County).

As was common for us, we decided to drive up the 101, instead of the quicker, but more monotonous I-5.  We passed through Santa Barbara, rounded the bend at Gaviota which turns you straight north towards Buelton. As you pass through “The Narrows” things really start to get beautiful. Anyone who’s done the drive will know what I mean. There is a point, where after having travelled uphill for a while, you open up to a plateau of sorts (shown above). When you reach that point, the splendor of Central California just hits you in the chest. I believe Dominique and I both made some sort of sound, like a loud exhale, or maybe a gasp. We looked at each other in unison and said, “What the hell are we doing in LA?”

Dominique held out her pinky and said “Pinky-swear, that we’ll move up here soon”. I reciprocated in kind, and the deal was done.

That’s where it all started.

Well mostly anyway. In truth, we had thought about “retiring” to the Central California Coast as far back as 2001. Back then my Mother was still with us, and Dominique and I would drive from LA to Marin County a few times per year for holidays and such. Since we’re always up for a good road trip, we would often explore the smaller by-ways between the I-5 and the 101. Just to see what was there. One time we even got lost on the small roads East of San Luis Obispo, and a local had to point us in the right direction in order to get back to the highway. Nav systems were still in their development stage at that time! We were always struck by the beauty of the area. The rolling hills and Oak trees. We frequently discussed just buying a plot of land and hanging on to it until later. But we just never got around to it. At that point we also harbored thoughts of moving to Southern France to retire. So we were not sure California would be the final place for us. Although we both have strong European backgrounds, over time we concluded that America was our home. France will always be there to visit.

View all posts by Gustave

This site uses Akismet to reduce spam. Learn how your comment data is processed.

We’re Dominique and Gustave. Join us on our journey to the wine country of Central California in Paso Robles.

Do you like design and architecture? How about food and wine? Discovering Central California? Well, you’re in the right place! Learn more about us!